No news for eight months 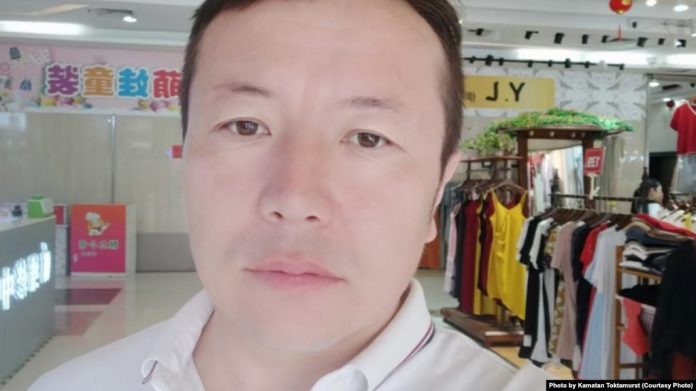 NEW YORK. KazUnite – Garapa Nasiollauly, the Kazakh singer and composer living in the Chinese province of Xinjiang was detained by the police last summer. Months later, relatives have no idea where he is or what he is accused of.

“I became a widow at 33. When my husband died, the eldest son was ten years old, and Garapa was only a year old. I thought I had raised them. And now I’m sitting in tears all the time … ”- cries old Kamatan Toktamurat, the mother of the singer, composer and poet popular among Kazakh youth in Xinjiang, Garapa Nasiollauly.

The mother of many children, who raised three sons and three daughters, now lives in the village of Koyandy near Nur-Sultan, with the family of her second son, who moved to Kazakhstan. Five of her children stayed in China. Kamatan Toktamurat fears she will never get to see Garapa, the youngest child, and says that she “lost her son.”

According to his mother, 34 years old Garapa was detained on July 9, 2021 by the police in Xinjiang. None of his relatives is aware of where he is now and what happened to him. His brothers and sisters cannot get any information.

Garapa Nasiollauly was born in Changji County. His main profession is a teacher of Kazakh language and literature. After graduating from the Beijing Language and Culture University, he worked at a high school in Changji. His wife is also a teacher. The couple has a three-year-old child.

Since 2018, Garapa had taken schoolchildren from Xinjiang to Zhangming, near Guangzhou, the center of southeastern Guangdong province, and taught there, according to his mother. This practice was called “Xinjiang class”.

“When he went there for the first time, we talked on the phone. He said, “We are going there with two thousand children and six teachers.” They don’t send regular teachers there, only proven ones. He was respected there too. He left in September and didn’t arrive until the summer break. On June 13, 2021, he told that he had returned. Then less than a month later he was arrested,” says Kamatan.

Upon his arrival in Zhangming, Garapa Nasiollauly launched the blogging platform named “Suley” on the popular Chinese social network Wechat, where he posted the works of poets and singers from Kazakhstan on a regular basis. His mother suggests that this hobby of her son may have been the reason for his detention.

I don’t think he did anything horrible. We expected for the authorities to give him a warning and let him go. But we haven’t heard from him for eight months now. They say it’s because of his “connection with Kazakhstan”. He only visited Kazakhstan once in 2017, spending about 15 days here. No one can say for sure where he is now. He did not see his brothers and sisters living there. We only heard that he might be in the city of Changji”, says Kamatan Toktamurat.

Nazhatbek Nursat, Garapa’s childhood friend, says that Nasiollauly has never opposed China’s policy towards Xinjiang and has worked in a government agency.

” He’s an excellent teacher. He has exceptional organizational skills. He was especially good at organizing creative events. He enjoyed great influence among the Chinese Kazakhs. He has about 30 songs. Famous Chinese pop stars sing Garapa’s song. He has no special musical education, but his songs mesmerized the audience with their natural beauty. We studied together for 12 years. He was a leader among us. Besides writing poetry, he was fond of aitys. He was well versed in world literature. He read the world’s best works in Chinese. He impressed us with his analysis of the works of writers, the Nobel Prize winners. He was very inquisitive from a young age. He also read the ancient Chinese literature. When he talked about Chinese literature, even his Han friends listened to him attentively,” says Nazhatbek Nursat.

Nazhatbek claims that the “Suley” blog platform has gained the trust of users, the materials published there are interesting for a wide audience. Garapa published many materials not only about Kazakh literature, but also on the topics of universal human values.

Serik Muratkhan, a native of China, now lives in Almaty. He says that the schools known in China as the “Xinjiang class” were originally created to assimilate non-Han people. According to him, such schools began to open in 2008. They recruit students of 10th, 11th and 12th grades from among the representatives of the indigenous ethnic groups of Xinjiang. Children with good Chinese language skills are sent to study in major cities such as Shanghai and Beijing.

P.S. As of the date of publication, we were notified that Garapa Nasiollauly’s court take place, but no decision has been officially announced. We will announce a decision when official.