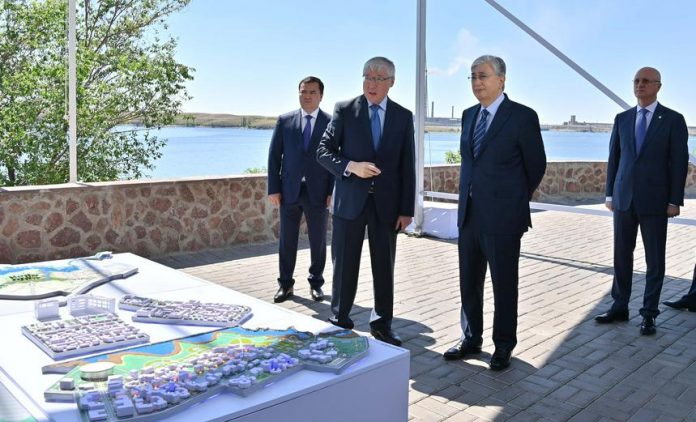 ZHEZKAZGAN. KazUnite – Governor of Ulytau region Berik Abdygaliuly has reported to the Head of State on the prospects of development of the region and Zhezkazgan city, Akorda press service informed.

According to him, environmental deterioration, critical condition of the roads, weak diversification of the city’s economy, dependence on large enterprises, wear and tear of utilities and communications infrastructure as well as the problems in social sector. Berik Abdygaliuly says that the establishment of a special economic zone will let speed up diversification of the region’s economy.

The region plans to complete the construction of Uitas-Aidos water pipeline by 2025. Beginning from 2023, Zhezkazgan city will be provided with water from the Eskulin water supply system. The municipal akimat has launched a housing renovation programme, as per which 20 residential estates will be built in the city.

He stressed the importance of building a state university, a supplementary education centre, new schools, sports and recreation centers and a philharmonic hall.

Kassym-Jomart Tokayev backed the initiatives put forward by the Governor of Ulytau region.

The President emphasized the need to improve local population’s living standard. He commissioned the Government and the akimat to take all required measures to develop road construction, environmental protection and education spheres.

Chairman of the Board of LLP Kazakhmys Company Eduard Ogay reported to the President on the prospects of development of the enterprise and the region. He said that his company is ready to contribute to the development of infrastructure of Zhezkazgan and Satpayev (small town).

«The company plans to allocate 25.4 billion tenge for this purpose that is twofold higher against 2021,» Eduard Ogay added.

However, the Head of State requested Kazakhmys Corporation «to increase financing, if possible, since 25.4 billion tenge does not seem enough». «Your help will be required in construction of social facilities and sports facilities. Local residents hope that the region’s infrastructure will be improved. Special attention should be given to social facilities too,» he stressed.

Besides, the company will focus on healthcare, education and sport sectors. For instance, Kazakhmys plans to build a children’s sports academy in Zhezkazgan in 2023, a 200-bed boarding school and housing.